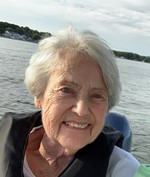 Alessandra Martini Sage passed away on Friday, June 10th, 2022, at the age of 76.
Alessandra (or Alex to her friends) had a wonderful and varied life.

She was born and raised in Rome, Italy in the 1940’s and got to traverse all through
Europe as she grew up. She became fluent in several languages but always had a
special attachment to and pride in her native Italian tongue. Wherever she went, people
always wondered about her accent. In the 1960’s, she landed in Manhattan as a
teenager. Eventually, she settled down, married, and had two children (Christina and
Henry), living first in New York and then in Colorado. In and around Aspen, she built a
great network of friends. Many shared her passion for both skiing and golf. Throughout
her life, golf was a touchstone through which she built long-lasting friendships. From
Colorado, she made her way to Atlanta, GA. During this period, she built a career as an
office manager at an Orthopedic Practice, which was fortunate for her accident-prone
son. While she loved Georgia, she decided to move south to Ponte Vedra Beach, FL.
She transitioned to selling real estate in Florida and golf continued to be a passion for
her. She developed a tight group of golfing ‘girls’ (as she called them). Her home on a
small cul-de-sac became another source of community that she cherished. Eventually,
she decided to move closer to her kids and settled in Pikesville, MD.

Throughout her life, she traveled as much as possible, taking her kids whenever she
could. She adored going back to Italy to see her two sisters (and of course to golf).
People will always remember how easily she made friends wherever she went.

Parkinson’s disease slowed her down later in life, but she tried to enjoy an active
lifestyle of skiing, golf, hiking and just being outdoors.

She is survived by her children, Christina Quigley (David) and Henry Sage (Amy); and
her 5 wonderful grandchildren, William, Isabella, Henry, Benjamin, and Elizabeth. She
was predeceased by her sisters, Bianca Martini and Diana Bevione; and parents,
Blanche and Antonio Martini.

Services are private. Contributions in her memory may be sent to the charity of your choice.