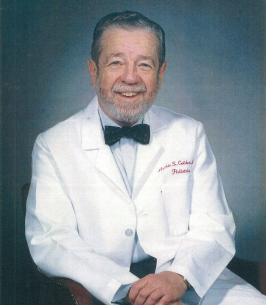 Dr. Golden was born in Danbury, CT and grew up in New Milford, CT. His father, Isadore Golden, was one of the first organic farmers in New England and his mother, Evelyn Golden, was the pillar of her synagogue for over 50 years.

He was a graduate of New Milford High School, the University of Connecticut, the University of Vermont College of Medicine, and The Johns Hopkins School of Hygiene and Public Health. Dr. Golden received his pediatric training in New York City at Lenox Hill Hospital and Bellevue Hospital.

His proudest achievement was providing care for children most in need throughout his professional life. He was captain in the US Army from 1959 to 1961 - spending a year in South Korea- caring for American and Korean children. His most rewarding contribution was being the doctor for two orphanages, “I would get a jeep and drive ten miles from Seoul to see these children”. Dr. Golden joined Project Hope as a Professor of Pediatrics at the University of Trujillo, in Peru, for four years, and at Cartagena University Hospital in Colombia for three years. In both Peru and Colombia he trained a variety of community health workers and treated patients. In 2010, the President of Peru presented Dr. Golden a special award for Distinguished Service to the People of Peru. In 1969-70, he was director of the health programs at Ganado on the Navajo Indian Reservation.

During his career, he wrote and edited two books, An Inventory for Primary Care Practice and The Art of Teaching Primary Care and published over 100 articles and chapters in medical journals. Dr. Golden brought innovation to the Johns Hopkins School of Medicine and Bayview Medical Center. He founded the Health Associates Program, one of the first physician assistant and physician associate programs in the United States. Dr. Golden particularly wanted to improve physician-patient communication. He was a pioneer in developing programs simulating doctor-patient interactions to train medical students and residents. This technique is used in medical schools across the world today. Throughout his career, Dr. Golden pushed his students to work beyond the medical center walls and into the community, while also bringing community workers inside the classroom. For further reading about Dr. Golden, https://pahx.org/assistants/golden-archie/.

Archie was an avid gardener, a steadfast Orioles fan and loyal to UConn Huskies’ basketball. He played Senior Softball and was inducted into the Anne Arundel Senior Softball Association Hall of Fame.

Dr. Golden is survived by his devoted partner, Penny Cordish; his daughters, Jenifer, Judith and Justine Golden; two grandchildren, Aaron and Ben Shelsby; son-in-law, Kim Shelsby; sisters, Alice Gaines and Bernice Golden Schwab; as well as his extended family including the Cordish children and many friends. He is predeceased by his spouse, Sylvia Golden, and his brother, Charles Golden.

A memorial service will be held on Monday, August 22, 2022, at 1:00pm EST at the Sol Levinson Funeral Home in Pikesville, Maryland. The family will receive guests from 4:00-7:00pm in Penny and Archie's home following the funeral service.