Bernard was born in Cordova, Alabama to Morris & Mae Dombrow who moved their family when Bernard was nine-years-old to Bay City, Texas where they opened a dry goods store and where Bernard became an avid boy scout and later an Eagle Scout. He grew up fishing, hunting, and enjoying the great outdoors with his father, Morris.

He went to the University of Texas in Austin for college where he studied accounting, ran track as a distance runner on the university team, and met Betty Posnick in a psychology class. They went on a few Coca-Cola dates. Then at age 17, Bernard enlisted in the navy during WWII where he was a radio operator. When he left the navy, he did so with an honorable discharge.

Bernard lost track of Betty until after he served in the military. His sister Miriam, who lived in Houston, said she knew of a cute girl in Galveston to introduce him to, and it turned out to be Betty. They were married on Dec. 2, 1951.

Betty’s family owned several drug stores called Texas Drug Store in Galveston, and they invited Bernard into the family business. He went back to school and got a degree in pharmacy graduating with honors. He opened another Texas Drug Store with a soda fountain and large gift shop where Betty worked alongside him for many years.

They worked hard and chose to get their business going before they had children. It was unusual at the time to have children in your 30’s, but that’s what they did. Bernard built a great life for Paula, Julie, and Neil, with a home on Lake Madeline where they sailed and fished and had many outdoor gatherings with friends and family. Bernard loved animals. He got his children many including rabbits, snakes, turtles, ducks, mice, hamsters, horny toads, a horse and a poodle who lived for 18 years. Bernard enjoyed tending to a beautiful yard. He loved taking the family on road trips across America. And above all, he cherished time with the extended family in Houston and in Galveston.

When the children were small, Bernard began what became one of his great life passions – public service. He began volunteering for various organizations, often with Betty joining him at his side.

They cooked together for the homeless at “Our Daily Bread” for many years. He cooked for the Ronald McDonald House for years. He volunteered as a bartender at Galveston’s Historic Opera House while Betty ushered. He was a tour guide at Galveston’s famous tourist site, Moody Gardens, where he guided tours
of the rainforest and its wildlife. He volunteered at The Bridge, a non-profit methadone program to help people addicted to heroin. He even organized and brought the United States Airforce Thunderbirds, the world’s first
supersonic air show, to Galveston to do a show for the entire city to enjoy. Bernard served several years on the school board of the Galveston Public School System, and become its President for two terms. He served as UJA President and was honored for his contribution to their donation drive. Bernard was also president of the Shul, Congregation Beth Jacob, while Betty served as President of the Jewish Sisterhood, and ran the shul’s gift shop.

After Bernard’s three children went to college, he and Betty began another of his life passions. They traveled extensively all over the world, including to Israel, Ireland, Australia, China, Russia, and much of Europe.

Bernard worked as a pharmacist into his late 70’s. He retired to take care of Betty when she was diagnosed with advanced Alzheimer’s. In 2008 they moved to Baltimore after Hurricane Ike devastated Galveston. They lived in an apartment a few blocks from Julie and her family. Bernard dutifully cared for Betty until she passed away on January 19, 2015. They were happily married for 64 years, and you would often see them holding hands.

Big life changes in later years did not stop Bernard, he continued his passion of volunteering in downtown Baltimore at Our Daily Bread and at Kosher Meals on Wheels where he packaged food for the homeless.

Bernard moved into Julie’s house with her family in 2018 where he kept the family, friends visiting for Shabbat and his many dedicated caretakers and aids entertained with lively conversations, stories, and his quick sense of humor.

Bernard was always interested in people. His care for every human being he came across showed in his words and his actions. He had his wits about him until the end at age 94. He was a gift and will be remembered with love and the smiles and laughter he brought to all those who knew him.

A private funeral will be held on Sunday, May 23rd, 2021 at 4:30 pm. Please use the "view the webcast" link to watch the service. Interment Agudath Israel Cemetery - Rosedale. Please omit flowers. The family will be in mourning at 6238 Woodcrest Ave, Baltimore, Maryland 21209.
Read Less

We encourage you to share your most beloved memories of Bernard here, so that the family and other loved ones can always see it. You can upload cherished photographs, or share your favorite stories, and can even comment on those shared by others. 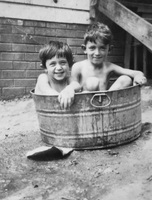 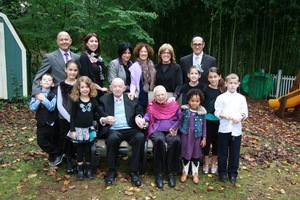