Donations are being accepted for:
U.S. Holocaust Memorial Museum

We encourage you to share your most beloved memories of Egon E. Weiss here, so that the family and other loved ones can always see it. You can upload cherished photographs, or share your favorite stories, and can even comment on those shared by others.

Posted Apr 12, 2021 at 09:39am
Diana and Family,
Our sincere condolences on the loss of your beloved father. May his memory be a blessing to all who knew him.
Comment Share
Share via:
L

Posted Apr 11, 2021 at 12:25pm
Diana, Jeffrey and family,
Your Dad and Mom also were wonderful, loving parents. Your Dad always had a smile when we were all together. May his memory be a blessing. Sending love and prayers to you
Comment Share
Share via:
RS

Posted Apr 11, 2021 at 12:21am
Diana and family
We are so sorry to learn of your father’s passing. We always enjoyed being with your parents whenever we were together. May your memories of your Mother and, now, your Father always bring a smile to your lips and be a source of pride for you, Jeff and your entire family. We are sorry that we can’t be there with you physically, but, you will constantly be in our thoughts.
Please accept our condolences.
Love,
Aunt Frannie and Uncle Richard
Comment Share
Share via:
LH

Posted Apr 10, 2021 at 03:22pm
Diana and Jeff,
Our hearts are heavy with the passing of your dad. I knew your mom and dad from the time we met at age 13. I remember coming to your house frequently as we were best friends. Your dad and mom were so warm and welcoming, like I was another daughter. I remember Vivian coming down to visit and sleepovers. Your mom would make us Hungarian pancakes with jelly for breakfast and your dad always sat and talked with us. They were always interested in hearing what was going on. I may not recall all the details but I do remember the feelings of warmth and love they created whenever I was there. I'm so glad I got to witness your life with them from such a young age. I will hold loving memories of them with you.
Love,
Lori and Bob
Comment Share
Share via:
VF

Posted Apr 10, 2021 at 01:22pm
My Uncle Eddie was such a wonderful and loving Uncle to me. I have such fond memories visiting my cousin, Diana on Yataruba Drive throughout our years growing up. He was truly a blessed man, having the love of his beautiful wife, Elizabeth and his devoted daughter, Diana and family. He is at rest now, and I think of him in peace, reunited with his beloved, Elizabeth.
Our deepest condolences from Vivian, Eva, Steven and Danielle.
Comment Share
Share via:
MA

Posted Apr 10, 2021 at 10:10am
Diana and Jeffrey
With our deepest sympathy on the loss of your dad. So very sorry for you and your beautiful family. Ellen and Myron
Comment Share
Share via: 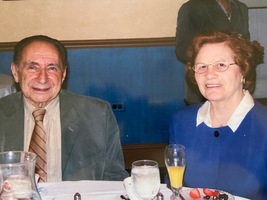 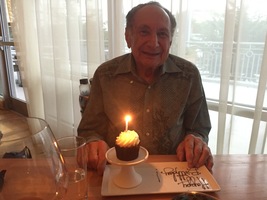