Donations are being accepted for:
The Associated: Jewish Community Federation of Baltimore

After his graduation from Cornell, he worked for the US Airforce in the early days of the space program. One of his spacecraft hangs in the Smithsonian National Air & Space Museum in Washington, DC. Subsequently, Ivan founded Avir Corporation. "Avir" in Hebrew means mighty, brave, strong, and one who fights for peace. Initially, he served as a consultant to NASA and eventually transitioned into real estate development and investments.

During his lifetime, he was devoted to the Technion and established a number of chairs in the names of his parents and gave generously to the scholarship fund. He received an honorary fellowship at the ATS Baltimore chapter thanking him for his commitment and dedication to the Technion. Ivan was also deeply committed to Israel and the Jewish people in America. He was president of the Beth Am Synagogue and at his seders, he sang beautifully and prayed from a Haggadah which was personally inscribed and given to him by Elie Wiesel.

Ivan cared most for his family, the Jewish community, art and architecture as well as classical music at the Baltimore Symphony Orchestra. In his free time he derived pleasure from tennis, skiing, working out at the JCC, and attending services. More than anything, he will be remembered for his love and gratitude for his family, his appreciation for this country and the freedom and opportunities it offers, as well as his eternal optimism and corny jokes.

We encourage you to share your most beloved memories of Ivan here, so that the family and other loved ones can always see it. You can upload cherished photographs, or share your favorite stories, and can even comment on those shared by others.

Posted Jan 15, 2021 at 01:29pm
I'm saddened to hear of Ivan's passing. I worked for a company that was a tenant in one of his buildings for many years here in Burlington, NJ. I could tell he was a man of integrity based on his visits and conversations we've had over the years. He seemed like a very sweet man and it was always a joy to see his face when he came. What a fascinating life he had. I would've never guessed based on his gentle disposition. My heartfelt condolences to his family and loved ones. This world needs more men like him.
Comment Share
Share via:
B

Posted Jan 03, 2021 at 07:53pm
I do not know this person, but the strength of his face in the picture, caused me to read about him. What a remarkable and strong person to have undergone such tragedy and hardship in his early life and to do so much with the later years!

To the Stern family:
My sincere condolences on Ivan's passing. I haven't seen him at all this past year due to the virus since I knew him from exercising at the JCC. He was a very pleasant man And I enjoyed talking to him about almost anything May your memories bring you comfort during the next days and months ahead.

Posted Jan 02, 2021 at 04:07pm
Gala, Denny and I want to extend our deepest condolences
Iva was my first partner when we started AVIR Associates. Working within was a rare and wonderful experience.
Comment Share
Share via:
BB

Posted Jan 01, 2021 at 04:06pm
For forty-six years I have attended Beth Am. Ivan Stern was part of the family. He will be greatly missed by my family.

Posted Jan 01, 2021 at 02:39pm
Dear Mr. Ivan Stern's Family and Friends,
After reading about the life of Mr. Ivan Stern the word Hero comes to mind. His life is one of which movies are made of. Our people have lost an amazing man whose strength, wisdom and courage gave Israel and all our people back their dignity.
The Jewish people have lost one of their finest sons.

Posted Jan 01, 2021 at 12:01pm
As a Guardian of Technion, Mort & I would like to send our deepest sympathy.
We looked forward to seeing him at Beth Am when we lived in Baltimore.
Comment Share
Share via:
SE

Posted Jan 01, 2021 at 10:59am
Gala and Natalie,
Sad news to greet the new year. Ivan's obit expresses him well. My memories... his mind worked well.
His commitment to his passions were always present. His views of the world, complex... which made him interesting to be with. My parents, Harriet and Henry Eisner championed their friendship with him and always with you Gala. Some great memories together as neighbors on Anton Farms. We'll miss this man's defined spirit. My condolences.

Posted Jan 01, 2021 at 07:53am
I always enjoyed our social interactions at the JCC. May Ivan Rest In Peace, and may his memory be a blessing to his family & friends!
Comment Share
Share via:
GB

Posted Jan 01, 2021 at 07:47am
Dear Gala and Family,
I am so sorry to learn of Ivan’s passing. Your devotion and caring for each other was well known to myself and I am sure to all who know you and Ivan. I keep you and your family in my thoughts and prayers.
Comment Share
Share via:
AB

Posted Dec 31, 2020 at 07:48pm
Please accept my deepest condolences.Wishing you peace to bring comfort, courage to face the days ahead and loving memories to forever hold in your heart. We met at the JCC many years ago. Ivan was a good friend of mine, we spent many hours discussing high tech, science world and politics. Ivan will be remembered by many at JCC. RIP dear Ivan.
Comment Share
Share via:
A

Posted Dec 31, 2020 at 05:35pm
We are very sorry to hear about the passing of Ivan. He was an extraordinary man and a wonderful neighbor. Our deepest sympathies to the family.
Comment Share
Share via:
KF

Posted Dec 31, 2020 at 04:44pm
On behalf of our entire family,I send our condolences for your loss. Ivan was a special person whose presence at Beth Am was warming and reassuring. May his memory be a source of love and warmth to all of you.
Comment Share
Share via: 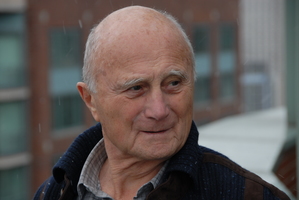