Dr. Davis was a scholar and an individual who loved Torah and performing mitzvot. His greatest pride was his children and grandchildren, and spending time with his devoted wife of over fifty years.

A Virtual Funeral will be held on Thursday, February 11th, 2021 at 12:00 pm. Private interment at Lubawitz Nusach Ari (Ner Tamid) Cemetery. Please omit flowers. Contributions in his memory may be sent to the charity of your choice.
Read Less

We encourage you to share your most beloved memories of Lawrence "Larry" Howard Davis here, so that the family and other loved ones can always see it. You can upload cherished photographs, or share your favorite stories, and can even comment on those shared by others.

Posted Feb 19, 2021 at 07:11pm
Sonya - I am so sorry to hear of Larry's passing. My sincerest condolences to you and your family. You are in my thoughts and prayers.
Comment Share
Share via:
CS

Posted Feb 15, 2021 at 04:09pm
When I was listening to your daughters speaking at the levaya it brought back memories of when you lived around the corner on Clover Rd. They described your husband as I remember him. HaMakom yenachem eschem b'soch sh'ar aveilei Tzion v'Yerushayim.
Chaya Sher
Comment Share
Share via:
DE

Posted Feb 13, 2021 at 11:03pm
I met Larry when I started grad school at Columbia in 1961. We jointly ran Seudot Shabbat for students who were on campus for Shabbos. He and I had many adventures dealing with the assistant Jewish chaplain, Rabbi Friedlander and getting around his boss. We shlepped to the East Side to buy wine at the best (cheapest) price and negotiated with the Meal Mart owner.. Larry was a true intellectual but also a lively, interesting friend. I remember him preparing for the entrance exam for the Rabbinical school at JTS, worried, as usual, that he might not make the grade (which of course he did). One of his decisions on matters of halacha sticks in my mind. Larry said that he observed a 3 hour minhag for the separation between meat and milk. His reasoning was somewhat unique. He said since his family was not observant he needed to go back to his grandfathers to decide which minhag to follow. One grandfather was chasid who undoubtedly observed 6 hours. The other grandfather was, if I recall correctly, an atheist communist who observed nothing. So Larry decided to split the difference; hence 3 hours. I also remember how proud all of us were when we learned that he had won a Danforth fellowship. When I drove my family across country some time about 1980, we called from the road when we reached St Louis. Unfortunately, we couldn't meet in person. That was the last time I heard his voice. I will miss him. T'hai nafsho tsrura bitsror hachaim.
Comment Share
Share via:
RK

Posted Feb 11, 2021 at 02:04pm
As a friend of Larry’s at Columbia, and friends of Larry and Sunny in subsequent years, we extend our heartfelt condolences to Sunny and the whole family. We were touched by the moving eulogies which resonated with some of our memories of Larry in those bygone years – you really brought Larry to life, as we remember him. May those memories, and many others, provide you with comfort and strength in the days and years ahead. המקום ינחם אתכם בתוך שאר אבלי ציון וירושלים Ron and Renana Kadden
Comment Share
Share via:
CM

Posted Feb 11, 2021 at 12:46pm
We did not have the privilege of knowing Larry at the height of his mental acuity, but his sense of humor and his appreciation of Sunny was always evident. We remember a Purim Seudah with just the four of us when Larry appeared at the table with a big grin, dressed as a motorcycle "dude" complete with a tattoo sleeve. May his neshamah have an aliyah. And may his family find comfort in their fond memories and in each other. Chelle and Bobby

Posted Feb 11, 2021 at 11:53am
I was a roommate of Larry's for 3 years at Columbia. I learned more from Larry than I did from most of my courses. He was a true friend and a model of integrity.
Comment Share
Share via:
ES

Posted Feb 11, 2021 at 11:52am
Sunny, we send our love and condolences on Larry’s passing. Please know that we are with you in spirit. May his memory be a blessing.
Comment Share
Share via: 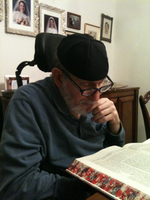 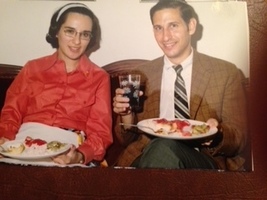