Your condolence has been submitted for approval. There may be a delay before posting.

Mitzie was born in Baltimore, Maryland in 1923. She was the daughter of Harry Polakoff and Sadie ... Read More
Mitzie Polakoff Cohen, a resident of Naples FL, and a former resident of Baltimore MD, Chicago IL, and Miami FL, died on February 6, 2021.

Mitzie was born in Baltimore, Maryland in 1923. She was the daughter of Harry Polakoff and Sadie Polakoff who operated a dry goods store on Carrollton Avenue for many years. She attended Western High School and graduated from Goucher College in 1943. Mitzie was always ahead of her time and taught physics and chemistry at Forest Park Senior High School.

Mitzie was an avid art collector and patron of the arts. Mitzie and Harry travelled extensively and enjoyed visiting museums throughout the world. Mitzie once remarked that she believed she and Harry “had visited every major art museum in the United States and Europe”. Mitzie was a very savvy financial investor who taught herself the intricacies of the stock market and enjoyed following the markets daily until the last day of her life. She made beautiful needlepoints and was an avid scrabble and card player. She was a past treasurer of the Aviva Chapter of Hadassah in Miami, Florida.

Mitzie will be remembered for her beautiful eyes, her warm smile and her ability to engage in conversation with anyone about anything. But she will be most remembered for her love of family. Spending time with, and having her family around her, was the brightest day of her life.

Funeral services are private. Due to the COVID-19 virus, there will be no formal shiva. Anyone who wishes to participate in a Zoom shiva should send their email address to Judycohen_2000@yahoo.com. Zoom services will take place at 7:00pm on Tuesday, February 16th through Thursday, February 18th. Contributions in memory of Mitzie Cohen may be made to the University of Maryland School of Medicine's Doctor Harry and Mrs. Mitzie Cohen Lectureship in Obstetrics-Gynecology and Anesthesiology. Checks may be payable to UMBF, Inc and sent to the University School of Medicine Development Office Attention: Tracy Morgan, 31 S Green St, Third Floor, Baltimore MD 21201, or to Avow Hospice, 1095 Whippoorwill Lane, Naples, FL 34105.
Read Less

We encourage you to share your most beloved memories of Mitzie here, so that the family and other loved ones can always see it. You can upload cherished photographs, or share your favorite stories, and can even comment on those shared by others.

Posted Feb 14, 2021 at 11:19am
Dear Joan and Family, I know how dedicated you and Bobby always were, and how special your Aunt was to you. May the time not be distant when your loving memories put a smile on your face and you will find comfort in them. With love and hugs!
Comment Share
Share via:
G

Posted Feb 11, 2021 at 10:54pm
Dear Joan and Bob
Sorry to learn of the loss of your Aunt. Burt and I send our condolences.
Comment Share
Share via:
TL

Posted Feb 11, 2021 at 12:31pm
Dear Debby, Judy and Howard,
There are so many memories that I have of my friend, Mitzi. A mutual friend told me that I should meet this couple that was moving to Miami from Baltimore. The home they were living in was only 5 minutes from our home, so we met after i knocked on her door and introduced myself. That was the beginning of our long friendship, Mitzi became active in my Hadassah group, Aviva, and our husbands, Harry and Morty became friends as well. When I couldn't find a gown for my son's wedding in all of Miami, she insisted that she had the perfect dress, and I should come over and get it...which I did, and of course, Mitzi was right, it was perfect, I wore the dress and loved it. As couples, we traveled together, and laughed and enjoyed our way through two weeks in San Francisco, and then driving to Nevada. So many memories, all good ones. Except, when Harry became ill just last year, and I knew that it would be difficult for Mitzi without Harry. I miss my friend, Mitzi, more than I can say here...she was like a sister to me. But now, she is back with her Harry and we all have our memories. To Mitzi's children, Debby, Judy and Howard, and to their spouses, I send my love and condolences. May Mitzi now rest in peace and once more be with the love of her life, Harry.
Comment Share
Share via:
CN

Posted Feb 11, 2021 at 11:34am
Carole Needle Dear Joan,Bob,Lisa&Lance Deepest sympathy on the loss of your Aunt Mitzie. I know how special she was to the family. She left great memories - Remember them during this difficult time.
Comment Share
Share via:
RG

Dear Joan,
Sorry to hear about the loss of your Aunt Mizzie. May her memories bring you support and comfort.
Randee Glassman
Comment Share
Share via:
MO

Posted Feb 11, 2021 at 10:16am
Dear Judy and family,
I am so sorry for your loss of your mom. She was a lovely, charming woman and I know how devoted you were to her. I hope that your wonderful memories will comfort you during this sad time.
Comment Share
Share via:
RF

Posted Feb 11, 2021 at 07:09am
Dear Cohen family,
I was so sorry to read of Mitzie’s passing this morning because I truly believed she and Harry would live forever. As neighbors Mitzie was the rock who supported me after losing both my parents within 11 weeks of each other so many years ago. They were the dearest people on earth and gave so much of themselves to others. So many memories came flooding back and with them a smile of warmth. May your days ahead be filled with the wonderful memories of shared experiences.....my sincere condolences.

Posted Feb 10, 2021 at 10:37pm
Dear Bob, Joan, Lisa and Lance,
We are so sorry for the loss of your aunt Mitzi. We know that she and your uncle Harry of blessed memory were very special to you. It was our honor to have known her. She was an elegant and worldly lady and the memories all of you have of her will always be a blessing.
Comment Share
Share via:
AK

We are so sorry to hear this news about your Aunt Mitzie. I know how close you were. Mitzie, Butzie and Gittie were my father's favorite cousin trio! We know how devoted you were to Mitzie. We hope your fond memories will bring you comfort during these difficult times.
Comment Share
Share via:
SW

I was so sorry to hear the sad news about your Aunt Mitzie. She was a remarkable, smart woman who was admired by so many people. Your relationship with her was so special and has left a tremendous void in your life. May happy memories be a source at this most difficult time.
Comment Share
Share via:
KE

Posted Feb 10, 2021 at 10:52am
Dear Joan, Bob and family
So sad to hear that you wonderful Aunt Mitzie has passed away. She was such a lovely and warm person. I know that Toba loved her and enjoyed her company. May her memories serve to keep her in your hearts.
Comment Share
Share via: 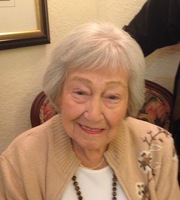