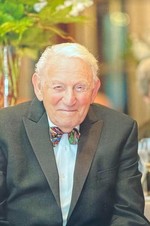 Dearly beloved by all who were lucky enough to know him. He helped so many people in so many ways. He'll live forever in our memories.

Services at Sol Levinson's Chapel, 8900 Reisterstown Road, Pikesville, MD 21208, on Monday, April 25th, 2022 at 12:30 pm. Interment Beth Jacob Cemetery. The family requests that all guests be either fully vaccinated or masked at the funeral and Shiva services. Please omit flowers. Contributions in his memory may be sent to The Associated: Jewish Community Federation of Baltimore, 101 W. Mt. Royal Avenue, Baltimore, MD 21201. The family will be in mourning Monday from 3-7pm with an evening Shiva service at the Pikesville Doubletree, 1726 Reisterstown Rd, Pikesville, MD 21208. The family will be receiving guests on Tuesday from 10-5 pm, at 3 Huntmeadow Court, Owings Mills, MD, 21117.