Rhoda was fond of her family’s history. When Isidore arrived in New York, he slept on a park bench in Tompkins Square Park before finding work. He became a tailor and later leader of the “Gold Coast” local of the International Ladies Garment Workers Union (ILGWU). Her mother Basha arrived from Russian on a family mission: to induce a revolutionary brother, Goodman David Gordin, to behave himself in the U.S., where he had fled from political exile in Chelyabin sk, Siberia. During the Kerensky government, Goodman returned to Russia and became a deputy minister. Both his children died in World War II. Basha, who never saw him again, told her daughter, “He died a disappointed man.”

Politics colored Rhoda’s childhood and her adulthood, in ways that might seem in conflict. Her father struggled against communists in his union, not always successfully. Yet one of Rhoda’s earliest memories was of being rushed from the Atlantic City boardwalk into an ILGWU conven tion hall in the 1930s, where she was delegated to present a donation to the visiting ambassador of the Spanish Republic, which was beset both by Franco’s Nationalists and Comintern agents.

She was a Brighton Beach girl, who played with a beloved older brother, Bernie, within sight of the family’s apartment window. If she differed with the future bow-tied copyright and intellectual property lawyer for Warner Brothers/Time Warner on anything, it was on whether such daringly modern composers as Rachmaninoff and Tchaikovsky were acceptable. Rhoda loved them.

She earned a Bachelor’s degree in Education from City College and became a New York City school teacher.
She met her future husband, Edward Lansky, a World War II veteran turned teacher, at a guitar class. They married in 1954. Neither learned to play the guitar, but they enjoyed the folk songs they sang on road trips, including later to a vacation home at Lake Waubeeka, in western Connecticut. Ed, who earned a Bachelor’s degree from New York University, and later two Master’s degrees, taught at “Brooklyn Tech” and Aviation High Schools.

Rhoda’s career with the New York City public school system took her from classroom teacher to superintendent of Manhattan’s largest school district. She later held a superintendency on Long Island, as well as an adjunct professorship at Queens College. Her dissertation for her doctor of education degree from Yeshiva University drew on her role during a contentious period in New York’s school decentralization.

She set an example of doing the right thing, even if it risked her career. The New York Times published three articles on her struggle with the politicized community school board in Manhattan. Backed by the majority of the district’s Parent Associations and the United Federation of Teachers, Rhoda faced a strange bedfellows alliance between a “progressive” school board fac tion that stood for “ingenuity” over the judgment of educational “professionals,” it said, and a rightist faction that sought taxpayer funds for programs that would benefit parochial schools. Together, they complained that Rhoda was insufficiently “accountable” to “community groups.” In contrast, Rhoda’s centrist supporters “credit[ed] her with running the borough's ‘only viable district for integrated, quality, public education.’ They also gave her high marks for ‘innovative programs’ and for ‘tireless’ campaigning to obtain increased funds and personnel, including more security guards and bilingual paraprofessionals,” The Times wrote.

Rhoda and Ed spent many happy afternoons at dress rehearsals of classical ballet productions staged by the American Ballet Theatre (ABT). The friendship offered Rhoda and Ed by mem bers of the ABT staff and crew warmed their retirement years. Rehearsals and performances were also an opportunity for Rhoda and Ed to see their son, David, ABT General manager, in his element.

Rhoda and Ed’s grandson, John Isaac Boland brought sweetness to their later years. Rhoda loved to listen to John Isaac's childhood disquisitions on his successful extra-solar planet hunting, ex plorations of astro-biology, and historical weapons and tactics. Her appetite for John Isaac's in volved commentary was a boon to a child who otherwise might reasonably have thought that his name was really “John-Isaac-Stop-Talking.” In her eighties, Rhoda enthusiastically participated in her grandson’s birthday sleepovers at the American Museum of Natural History in New York and at the National Aquarium in Baltimore. At the latter she gamely traversed the behind-the scenes catwalks over the shark tanks and slept on the floor.

Rhoda had her bat mitzvah in 1983 at the Hillcrest Jewish Center in New York.

The pair enjoyed many firm friends from their summers and holidays at Lake Waubeeka in west ern Connecticut, from their earliest days as teachers, and from their travels overseas.

They were happiest at family gatherings. Rhoda and Ed enjoyed many celebrations with son David (Amy); daughter Mira (John Boland) and grandson, John Isaac; the late Bernard Sorkin (Claire) and children Deborah (Bob Smith), Noah (Stephanie) and Aaron Sorkin and grandchil dren, Natalie and Emily Smith, Dana and Matthew Sorkin, and Roxanne Sorkin; the late Eliza beth and the late George Levine, their daughter, the late Lisa Levine (Robert Edwards) and grandson Devin; the late Gershon and Edith Gordin, their children Sandra (Ralph Stanin), the late Raymond Gordin (Claire), and the late Teddy and Janet Gordin, and grandchildren Rachel, Norma, and Myra, Bonnie and Michael; the late Eugene and Evelyn Wexler and their sons, Ricky and Steve and their families; and the late August and Pearl Wexler, their children, Leslie (Uzi Wolf), Marsha (Giora Radnovitz), and their families, and the late Roy (Reuven); Richard Adelson and the late Beverly and their daughter, Amy; and the late Lou and Edith Plotkin and their late daughter Fonda. Rhoda and Ed were delighted to meet long-separated family from Russia, including Rhoda’s paternal aunt Chaika, cousin Senya Sorkin (Irina Lobashov) and their son Pavel (Paul) Lobashov, and members of the Leokumovits and Tsasman families.

Edward Lansky died in 2004 after a long illness.
Read Less

We encourage you to share your most beloved memories of Rhoda here, so that the family and other loved ones can always see it. You can upload cherished photographs, or share your favorite stories, and can even comment on those shared by others. 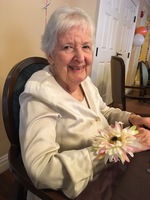