Donations are being accepted for:
American Stroke Foundation

Shirley was a graduate of Forest Park High School, and spent most of her adult life involved in local community theatres, including The Lord Mayor’s Players, The Spotlighters, Corner Theatre, The Vagabond Players, Cockpit in Court, and The Baltimore Playwrights’ Festival among many others.

She’d done acting, directing, costume design, and mainly publicity and for decades, was a fixture on the local theatre scene.

A virtual funeral will be held on Monday April 26, 9:30 am. You can view the service on Levinson's website. There will not be a formal Shiva, but a luncheon for family will follow the service at the home of Elizabeth, 38 Second Avenue 21227.

In lieu of flowers, donations may be made in memory of Shirley to The American Stroke Foundation, 6405 Metcalf Avenue, Suite 214, Overland Park, KS 66202 or online at americanstroke.org/donate.
Read Less

We encourage you to share your most beloved memories of Shirley here, so that the family and other loved ones can always see it. You can upload cherished photographs, or share your favorite stories, and can even comment on those shared by others.

Posted Apr 26, 2021 at 10:06am
Sorry to hear about the passing of Shirley Bell. I remember so well working with her and local theatre productions and events. Also sorry that I had not seen her in such a long time...
Comment Share
Share via:
NS

Posted Apr 23, 2021 at 09:15pm
Beth and family,
I am so sorry for the loss of your beautiful mom. She had a full life. May your memories with her always be of comfort to you, now and always.
Comment Share
Share via: 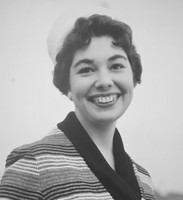