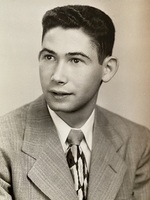 Stan grew up in Baltimore, Maryland. He graduated from Park School. After high school he attended University of Baltimore Law School. He served in the Air Force during the Korean War from 1951-1955 and he worked for Veteran’s Administration as a Loan Specialist.

Stan married Mildred Shirley (Millie) Bressler in 1958 in Baltimore, Maryland. They were happily married for 63 years. Stan had a great many hobbies and interests. He belonged to many organizations and served as the President of the Gem Cutters Guild of Baltimore, served as an election judge for many years, and was a long-time docent at the Baltimore Zoo and usher with Millie at many local Baltimore theaters. He was an avid gardener and took great pride in growing beautiful tulips of many colors and tomatoes of every variety. He enjoyed fishing and crabbing (and eating Maryland crab cakes); animals of all kinds (especially dogs Bo and Darby and Joyce the chimpanzee), except the squirrels that always raided his bird feeders; traveling the world with and making jewelry for Millie; and “collecting” and finding uses for things that others might thoughtlessly discard. Above all, however, Stan loved spending time with family and friends.

Stan is survived by his spouse Millie (nee Bressler); his children Amy and her husband Jon, and Stuart and his wife Dolcene; grandchildren Jack and Ryan; and sister Miriam Bernice Dorf. He was predeceased by his brother, Judge Paul A. Dorf.

A private funeral service will be held at his gravesite. No visitation will be held at this time because of the pandemic. In lieu of flowers the family requests memorial donations be made in his name to the Maryland Zoo.