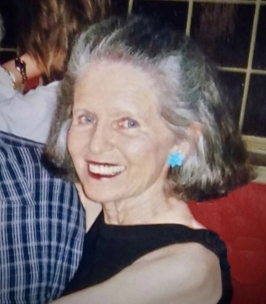 Georgia (Sylvia) Carasik Parker died peacefully on September 16, 2022 at NewBridge on the Charles in Dedham, MA, having relocated to the Boston area in 2019 from her beloved native Baltimore. She was 84.

A vibrant creative force to all who knew her, she was the daughter of the late Morris (Pat) and Ann Adleman Carasik and is survived by her daughter, Dana Doran Parker, and her partner, Kenneth D. Krilla; sister, Diane Carasik Dion, and her husband, Arthur Dion; nephew, Nicholas Morris Dion, his wife, Jaclyn Rappaport, and their daughter, Cara Madeline Dion, as well as many cousins and treasured friends in Maryland, Massachusetts, Vermont, and California.

Georgia’s generosity of spirit, legendary humor, and joie de vivre knew no bounds. Not much got past her piercing blue eyes. She had a huge heart and was a soft touch, adored by all she welcomed to join her at play in “Georgia World.”

A fierce Democrat and progressive political activist, she was a graduate of Forest Park High School and the University of Maryland and did graduate work at the Maryland Institute College of Art. A longtime Baltimore public school teacher, her rich roster of avocations included artist, cineaste, music aficionado, calligrapher, and tap dancer extraordinaire (just ask Gregory Hines). She enjoyed a long affiliation with Baltimore’s Cinema Sundays at The Charles and The Maryland Film Festival and was a dedicated volunteer at the American Civil Liberties Union of Maryland and a devoted longtime member of Beth Am Synagogue.

Contributions in Georgia’s memory may be made to Beth Am Synagogue (bethambaltimore.org), the ACLU of Maryland (aclu@aclu-md.org), or Center Communities of Brookline (hebrewseniorlife.org).

A service will be held at Sol Levinson & Bros., 8900 Reisterstown Road, Pikesville, MD, 21208, on Tuesday September 20, 2022, at 2 pm, with burial at Arlington Chizuk Amuno Cemetery. Shiva will follow at the home of Jennifer Keyser, 3 Goodale Place, Baltimore 21212, until 8pm on Tuesday, and Wednesday from 1 pm to 8 pm with a minyan at 7pm both evenings. We recommend parking at the St. Mary's Cemetery parking lot on Homeland Ave. Walk across Homeland Ave. and down the little alley to the first house on the right.