Donations are being accepted for:
NA'AMAT USA

Mrs. Shapiro was born in Bialystok, Poland. Immediately following the Holocaust and surviving Auschwitz, she went back to her home in Bialystok and only her brother's home remained. However, it was occupied by other survivors, one of whom she married. She and Mr. Shapiro moved to the United States in 1949. Mrs. Shapiro’s passion was to educate children on the consequences of hate, and the tragedy that stems from hate. She spoke at schools, universities, churches, army bases and community centers to convey this message of love and peace in hopes that there would never be another tragedy such as the Holocaust. Mrs. Shapiro was committed to serving her community and those in need. She is most remembered as the communal “Bubby” to all that knew and loved her. Mrs. Shapiro put family above all else as shown through her devotion towards her four grandchildren and six great-grandchildren. May her memory be a blessing.

We encourage you to share your most beloved memories of Bluma E. Shapiro here, so that the family and other loved ones can always see it. You can upload cherished photographs, or share your favorite stories, and can even comment on those shared by others.

Posted Mar 16, 2021 at 10:10pm
A bright, sharp lady, Bluma continued her studies at the Baltimore Hebrew College where she and my late mother, Miriam Kipper, studied together. Bluma was a top rate adult learner, with a strong command of Hebrew. I had the good fortune to know Bluma through my teaching of the Holocaust and when Bluma spoke to our students at Krieger Schechter. Her extraordinary ability to relive the details of her heart- wrenching story evoked so much compassion for her. Her wisdom and foresight enabled her to carry on and do all the good that she did.
Comment Share
Share via:
SM

Posted Mar 12, 2021 at 08:54pm
Dear Barry, Carol and family,
Bluma was not only our neighbor down the street in Ranchleigh, but was a dear and close friend to my parents, Sally and Henry Finkelstein. Bluma was truly an amazing lady. She was so dedicated in sharing her story of survival with the world and her kindness and zest for life was remarkable. She was so proud of her family and loved talking about her grandchildren. To know Bluma was to love her. She will be missed and may her memory be for a blessing!
Comment Share
Share via:
BL

Posted Mar 12, 2021 at 05:13pm
Shapiro family, We are saddened for you all upon learning of your mother’s passing. In 1994 your mom spoke at a Gathering we hosted for non Jewish friends, neighbors, and business associates. Her story touched each and everyone present. The Franklin High School principal attended this Gathering. Besides writing us a heartfelt note she “found” school funds to send the history dept head to classes for educators at the Holocaust Museum in DC. Your mom touched many lives. She was surely a Woman of Valor. May her memory be forever a blessing.
Comment Share
Share via:
B

Posted Mar 12, 2021 at 04:14pm
Barry, Carol and the Shapiro family,
We are so sorry for your loss and pray Yeshua's comfort and peace be with you. I was a true honor to have known your mother even for a short time.
Our Sincerest Sympathies and Condolences,
Barb and Rich Heldibridle
Comment Share
Share via:
M

Posted Mar 12, 2021 at 04:06pm
We met when Bluma volunteered as a Mitzvah Mobility driver for Jewish Community Services; she was happy to help others and make their day easier; Bluma was an example of kindness, goodness and generosity in her efforts to reach out to others. May her memory be for a blessing to her family and the Jewish community.
Comment Share
Share via:
SG

We are glad that your mom's suffering is over, and she is finally at peace. From all you have said about her, as well as the comments here, she was an amazing woman. May you all be comforted by your many happy memories.
Comment Share
Share via:
HS

Posted Mar 11, 2021 at 10:10am
Dear Barry and Carol, We’re so sorry to hear about the loss of your mother. What an amazing person she was! From a young life of tragedy she built a strong happy family and lived a life of purpose. May your memories be a blessing.
Comment Share
Share via:
IA

Posted Mar 11, 2021 at 09:25am
Bluma was a friend to my husband's grandparents, Tuvia and Chana Alon. Many years ago, Bluma met our son, and immediately she knew the connection. She was a remarkable woman. May you find comfort and strength in your blessed memories. Ilene and Shay Alon
Comment Share
Share via:
KA

Posted Mar 11, 2021 at 08:18am
Dear Barry, Carol, and Family,
Our deepest sympathy for the loss of your Beloved mother, grandmother, great- grandmother.We hope your many wonderful memories will bring you strength during this difficult time and always.
Comment Share
Share via:
E

Posted Mar 11, 2021 at 07:47am
Dear Barry and Carol and Family.. I am so very sorry to hear of the passing of Bluma.. she was always so kind and loving to me and I would love to just sit and talk with her. She was a beautiful lady. My deepest condolences to everyone.
Comment Share
Share via:
ML

Posted Mar 11, 2021 at 06:58am
To Bluma's family.....words can't convey how sorry I am for your loss. Bluma was a close family friend to my parents, Morris and Sally Gottlieb and especially to my mom. I don't believe a day went by that they didn't speak.
My cousin Harry Kozlovsky described her perfectly. She lit up a room with her beautiful smile and wanted to teach the world and younger generations the damage hate causes. I looked forward to seeing her each year at the Holocaust Remembrance Day gathering, especially after my mom passed. Getting a hug from her and catching up brought up so many wonderful memories of when the room was filled with survivors. She will be missed by so many.

Posted Mar 11, 2021 at 05:33am
A generation gone. Bluma was the last close survivor and surviving friend of Bernie and my parents, Rose and Leon Kozlovsky’s z”l.

She was most kind, gregarious, expressive, and passionate about their friendship and about her life. She would glow every time I saw her. She was so full of the life that she recaptured out of her horrors she had faced.

So many great memories.

Posted Mar 11, 2021 at 05:22am
Dear Barry and Carol
We extend our deepest sympathy to you and your family on the passing of Bluma. Her passionate love for her family and friends and the community was so vibrant!! She will truly be missed!
Comment Share
Share via:
PP

Posted Mar 10, 2021 at 11:07pm
Dear Carol and Barry, Robert and I extend our sincere condolences on Bluma’s passing. She was a wonderful lady who always had a smile. May her memory be a blessing.
Comment Share
Share via:
SF

Posted Mar 10, 2021 at 09:57pm
Barry and Carol
My deepest sympathies upon the loss of my former neighbor who was a simply lovely lady.
Cherish the memories of all the good times shared and knowing how much she loved you, your kids and their kids as well as your cousins and their families

Posted Mar 10, 2021 at 09:45pm
Bluma made everyone who was blessed to interact with her a better human than they might otherwise have been. For many years she came to John Carroll and shared her story with 100s of our students. She told them truths and gave them an opportunity to learn and grow. Bluma's smile could light up a room. She made everyone feel better about themselves. The last time I saw her as she was about to leave she took my hand in hers and told me that she hoped she would be able to see me again and then she told me to be well. The world's light has dimmed Bluma now that you are gone but I do hope to see you again. LBG
Comment Share
Share via:
AL

Posted Mar 10, 2021 at 08:44pm
Blumie - the world is emptier tonight without you in it. You gave love every day to everyone that you knew and you made us all try to be better people. You gave us the gift of your history and taught so many of us to see what the world can be if we treat each other with love and respect. It was our honor to have had you in our lives.
Andi and Jon 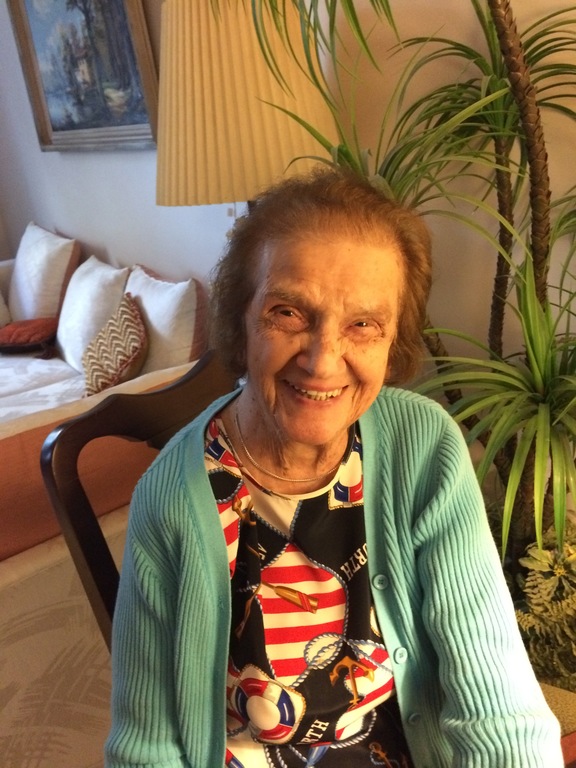 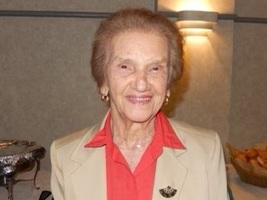 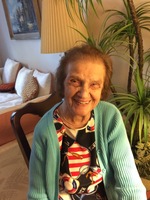 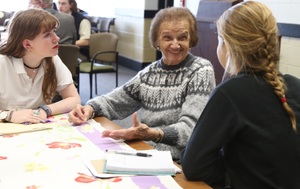